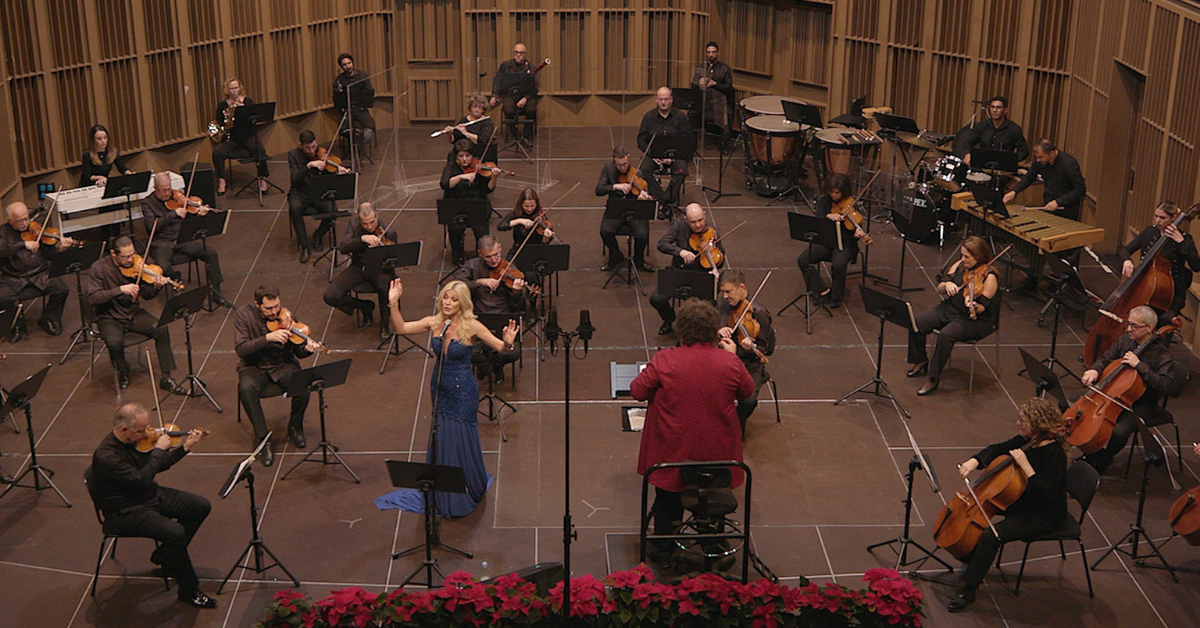 Aliki Chrysochou’s spectacular voice and presentation graced the stage. Her full, rich soprano and clear enunciation elevated each song and as always, her charm enchanted the audience – which was online this time due to COVID-19 measures. Aliki’s voice maintained a beautiful tone on each of the notes in the song, gathered power on the high notes and the singer paced her dynamics in an exciting way.

Aliki Chrysochou was energetically accompanied by a spirited delivery from the orchestra led by the Venezuelan conductor Gerardo Estrada Martínez. Mr. Martínez gave free reign to the orchestra’s passion, inspiring their precision to new heights of expression.

Born in Caracas, Venezuela on August 5, 1980, Gerardo Estrada Martínez trained as a violinist and later studied the percussion.

The musical arrangements were well-chosen for their elegant twists on the familiar Christmas tunes. Jingle Bells had some catchy rhythmic changes arranged by E. Diaz. The song was played in a lively and up-tempo manner well fitting to its joyful sound. Jazzy touches were a highlight of Marios Markou’s clarinet performance on White Christmas.

Wolfgang Schroeder gave a bold, stand-out solo during Vivaldi’s Winter. The lead violinist’s phrasing was personal and passionate with sensitive dynamics. The notes were fresh and soaring with emphasis in the right places, the tensions and releases were beautifully performed.

The virtual concert was organized in collaboration with PwC Cyprus and dedicated to our frontline heroes, who are none other than all the medical, nursing and support staff who are giving their own every day battle on the frontlines to tackle the COVID-19 pandemic.

Review by SARAH FENWICK on cyprusnewsreport.com